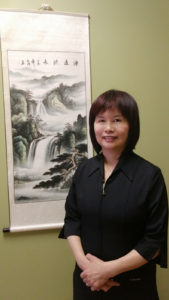 Yuxiang Wang attended Tianjin University of Chinese Medicine, in their extensive and demanding eight-year program, recognized as one of the best medical programs in the People’s Republic of China. There, Yuxiang studied TCM and Western medicine and was awarded her Bachelor’s Degree in TCM, followed by her Master’s Degree with Honors in Gynecology in 1986. After finishing school, Yuxiang worked at the Teaching Hospital in the gynecology department. After two years she was sent to the Central Gynecology & Obstetrics Hospital in Tianjin to train in Western medicine in a two-year residency.

After emigrating from China, she worked at clinics in Philadelphia and Toronto and eventually opened her own private practice, Herb Fragrance Oriental Healing Centre in 2005 and opened a second clinic on Eglinton Ave W. in 2012 (Originally named CGICM and renamed Radiance Chinese Medicine and Wellness Centre in 2017).

In addition to her clinical work, Yuxiang is dedicated to sharing her knowledge and experience. She has been an instructor at the Toronto School of Traditional Chinese Medicine, teaching their gynecology courses such as TCM Gynecology and Integrated Gynecology, and has taught for Eight Branches in addition to her own school, The Canadian Gynecology Institute of Chinese Medicine. She is developing a series of online Post Graduate TCM Gynecology Courses and prioritizes her role as a teacher and mentor.

Yuxiang has successfully treated a wide range of chronic and acute illnesses during her many years of practicing experience. Many of her papers have appeared in acclaimed TCM journals.