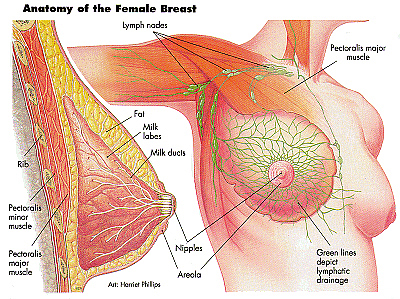 Breast cancer is a malignant tumor of the breast, most often seen in women.

Breast cancer most often begins in the duct lining or in the lobule lining.  As you can see from the above picture, the breast is infiltrated with lymph nodes.  These lymph nodes connect to the surrounding axillary lymph nodes (arm pits), internal mammary nodes (deep chest), and the supra- or infraclavicular nodes (collarbone).  Because of this lymphatic drainage system, cancer can easily spread throughout the body (metastasize).  Therefore it is imperative to know if the cancer has spread in order to guide treatment. 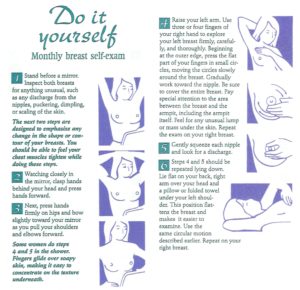 Women who are over the age of 50 are most at risk.  Those with a genetic predisposition have their risk factor increase by 80%.  Those with a family history are also at a much higher risk.  Caucasian women develop breast cancer more, but African American women have a higher mortality rate.  Those of Asian, Hispanic or Native American descent have a lower risk of developing breast cancer.  Other risk factors include: previous breast radiation, abnormal breast biopsy, atypical hyperplasia, early menarche, not having children, using birth control for more than ten years, using hormone replacement therapy (HRT), high alcohol consumption, obesity with a high fat content around the waist, a high fat diet and sedentary lifestyle.

The most common sign is a lump or mass in the breast.  Lumps and masses that are more often cancerous are those that are painless, hard and have irregular edges, though lumps that are tender, soft and round can also be malignant.  Check with a doctor if you have any new lumps!  There can also be swelling, skin irritation or dimpling, nipple pain or retraction, a red area, scaly skin, or abnormal lactation.

The nuclear grade of a tumor depicts how abnormal cells are and the presence or absence of necrosis.  There are also tests done that look for estrogen or progesterone receptors to determine if the cancer is hormonally dependent.

Adenocarcinomas incorporate almost all breast cancers.  Adenocarcinoma refers to cancer of a glandular tissue and is a term used most often when describing cancers of the lung, stomach and breast.

Ductal Carcinoma In Situ (20%) Cancer cells limited to the duct and have not spread.  Found through mammograms and are easily cured.  If necrosis is present, the cancer is more aggressive. Lobular

Lobular Carcinoma In Situ Not a true cancer.  Limited to milk producing glands.  Not invasive but increases the risk of developing invasive breast cancer. Invasive

Invasive Ductal Carcinoma Most common type (80%).  Starts in milk passage or duct and invades the fatty tissue of the breast, where it can spread through lymph system, blood system, or metastasize. Lobular

Invasive Lobular Carcinoma (10%) Start in milk producing glands or lobules.  It is harder to detect through mammogram and tends to metastasize.