Diagnosis is made easy with a Pap test, HPV test or colposcopy report. Differentiated syndrome can be made from patient’s symptoms, tongue and pulse. Except accumulated damp in lower jiao, which is present in almost in all cases, the main syndromes include Spleen deficiency, Liver Qi stagnation, Kidney Yin deficiency, Kidney Yang deficiency, and accumulated dampness-heat. In the beginning stages, Zheng Qi (right Qi, good Qi) is not too weak and Xie Qi (evil Qi, pathogen, infection) is not too violent and it belong to excess syndromes.  As the disease progresses, Zheng Qi is exhausted and Xie Qi is more violent and there are more complicated cases of deficiency with excess.

It was recognized that if cervical lesions cytologically identified as dysplasia (abnormal change of epithelial cell) are not treated they can progress to cervical cancer.   So the concept of cervical intraepithelial neoplasia (CIN) was introduced to describe cervical precancerous and cancerous conditions. 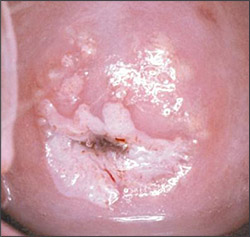 The criteria for the diagnosis of intraepithelial neoplasia may vary according to the pathologist, but the significant features are cellular immaturity, cellar disorganization, nuclear abnormalities, and increased mitotic activity. If the mitoses and immature cells are present only in the lower one third of the epithelium, the lesion is designated as CIN1, Involvement of the middle and upper thirds is diagnosed as CIN2 and CIN3.

Human Papillomavirus: HPV are a group of small DNA viruses, of which there are 100+ types that can infect the epithelial cells of humans. More than 20 types of HPV which are transmitted through sexual contact are called genital HPV types.  The percentage of intraepithelial neoplasia apparently attributed to HPV infection approaches 90%.

Usually, HPV infections do not persist. Most women have no apparent clinical evidence of disease, and the infection is eventually suppressed or eliminated. Other women exhibit low-grade cervical lesions that may progress spontaneously. A minority of women exposed to HPV develop persistent infection that may progress to CIN. Factors that may have a role in this progression include smoking, contraceptive use, infection with other sexually transmitted diseases or nutrition. Any factor that influences the integration of HPV DNA into the human genome may cause progression to invasive disease.

With the papanicolaou test and HPV test, colposcopy, or biopsy, cervical intraepithelial neoplasia and severity can be established.

The Papanicolaou Test – or PAP test is a cervical cytological test.  Previously, the Pap test was done by scraping the cervical opening area to pick up the cells to transfer them to the glass slide. False-negative errors occur in sampling, preparation and interpretation.  Presently, the liquid-based media to collect the cytological sample is performed. The cell sample is collected with an endocervical brush, then rinsed in a vial containing liquid preservative. Liquid-based cytology assessment improves the sensitivity of the Pap test and reduces its false-negative rate.

HPV Test: Here inCanada, the HPV test is rarely administered due to its costliness.

HPVs are viruses and stay in host cells, which are unable to separate them from human body with culture.  HPV tests are methods for detection of HPV genomes and anti-HPV antibodies to diagnosis HPV infection and identifying HPV types.

The following can be colposcopy findings:

Endocervical Curettage & Cervical Biopsy: this is done through pathological testing.

Ablative (removal of tissue) therapy is appropriate when there is no evidence of micro-invasive or invasive cancer on cytology, colposcopy, endocervical curettage and cervical biopsy, when the lesion is located on the ectocervix and can be seen entirely, or when there is no involvement of the endocervix.  Ablative therapy includes cryotherapy, laser, and LEEP electrosurgical excision. Because all therapy carries a recurrence rate of up to 10%, Pap test follow-up ate about 3-month intervals for 1 year is necessary.

Other treatments include conization, hysterectomy (there are some situations in which hysterectomy remains a valid and appropriate method of treatment for CIN), or microinvasion. CIN3 is the limit of conisation specimen and generally has poor compliance with follow-up.  Other gynecological problems requiring hysterectomy include adjunctive fibroids, prolapse, endometriosis, and pelvic inflammatory disease.

CIN and cervical cancer are classified as leukorrhea or Zheng Jia in Chinese Medicine.  In ancient literature there was some description about cervical cancer.  Huang Di Nei Jing said “Ren meridian diseases manifest as leukorrhea and abdominal mass… warts (neoplasias) are due to deficiency of Zheng Qi.

HPV is associated with premalignant cervical diseases and cervical cancer, but HPV infections are very common and 79% of all women will catch at least one infection in their lifetime.  60%-70% of female cases are temporary and will resolve spontaneously within 2 years through the hosts immune response to the virus.  HPV is an external cause for CINa nd cervical cancer.  There are internal causes for the woman who gets a latent HPV infection that finally develops into a premalignant cervical disease or cervical disease. Internal factors include improper sexual activity, multiple pregnancies and abortions, deep cervical injury from abortion or trauma, irregular menstruation, emotional factors, which result in deficiency of Zheng Qi.

HPV as an external cause has a dampness characteristic.  Some latent HPV infection patients manifesting with excessive vaginal discharge and low abdominal bloating are related with Spleen deficiency. Liver stagnation and Spleen deficiency with dampness-heat is a very common syndrome in the mild CIN cases. With long-standing HPV infections, the Kidney Yin and Yang are injured by long term dampness-heat toxin invading on the uterus gate. Kidney Yin deficiency or Kidney Yang deficiency as internal causes result in CIN progression.

External Treatment includes herbal powders for cervical application.  Clients and practitioners alike, contact us for details.   The powders include: Clear Cervix Complex, Clear Wart Complex, Herbal Creams and Herbal Formulas for Sitz Baths.  All of these can help the body to clear CIN infections externally, eliminating the need for invasive western therapies.

CIN infections are a manifestation of an internal deficiency and an external pathogen attacking and Chinese Medicine targets both to provide a holistic treatment.