Menstrual Physiology: The Kidneys, Tiangui and the Chong Meridian 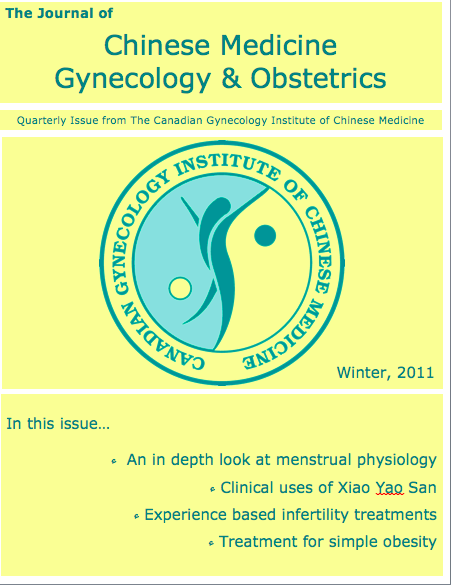 Menstrual Physiology. Earlier we published a blog post on the mechanisms of menstruation, which outlined the basic ‘what & how’ with regards to menstruation.  This article is more about the ‘process.’   It is based off of an article that Dr. Wang has already written, as is written for Practitioners of Chinese Medicine.

The theory of menstrual physiology started as far back as the Huang Di Nei Jing, the earliest text in Chinese medicine that describes human sexual development.  It states that at age seven, girls start to develop permanent teeth and their Kidney Qi starts to mature.  Menstruation occurs at age of 14 with the appearance of Tiangui and the flourishing flow of Qi and Blood in the Ren and Chong meridians.  In later texts, many medical men have advanced the theory about the Kidney, Tiangui, and Chong and Ren meridians, but much information is still lacking on their interactions.  That is why this theory is so important for the study and clinical treatment of gynecology and menstrual physiology in Chinese medicine. It is imperative to explore this interaction between the Kidney, Tiangui and Chong meridian to better guide our practice.

To give the complete picture, the Kidney also coordinates with the Heart, Liver, Spleen and Lungs, so that the Blood and Qi in the Chong meridian nourishes the organs interiorly and muscles and joints exteriorly. The upward, downward, inward and outward circulation of Blood and Qi are what results in regular menstruation and the storing and eliminating function of Kidney.

Therefore in the clinic, it is important to regulate the movement of Qi when treating gynecological diseases; when there is a deficiency of Chong-Qi, the Kidney Qi should also be strengthened and the Liver should be regulated, especially in cases of abnormal Qi movement in Chong-Qi excess syndromes.  Let’s look at these processes in a little more depth.

As stated earlier, there are three key factors in menstrual formation: the growth of Kidney Qi, the arrival of Tiangui, and the flourishing flow of Qi and Blood in Chong and Ren meridians. The prerequisite for menstruation is the maturation of Kidney Qi and so it therefore plays the most important role on the formation of the menstruation.

Zhang Jing Yue, who wrote the Complete Works of Jing Yue, states: “menses are the extra part of Blood,” which implies that menstruation originates from the Blood.  All kinds of material transformations that happen through life rely on the Qihua function of the Kidney. Transformation from Blood into menses occurs under the power of Qihua upon the maturation of the Kidney Qi which then initiates the production of Tiangui- or the component of the Kidney that is responsible for sexual function.

In Chinese, Tiangui or Tiangui Zhi has two meanings.  Firstly, Tiangui is the growth from feebleness to prosperity (“Zhi” means ‘strength’ or ‘prosperity’).  Secondly, it denotes the transportation of Tiangui to the uterus after being produced by the Kidney (“Zhi” also means ‘arriving’). These two meanings are complementary for the reason that only prosperous Tiangui is able to be transported to the uterus.

The nature of Tiangui has been a topic of dispute from ancient times to present times. During the Ming dynasty, Ma Shi stated that Tiangui is innate Kidney Yin-essence (Yuan Yin).  Zhang Jing Yue held that Tiangui is one component of primordial Qi (Yuan Qi).  The author of the book Yi Zong Jin Jian (Golden Mirror of Medicine) described Tiangui as the active Qi between both Kidneys.  Although these views of Tiangui differ, they have the same basic perspective about the nature of Tiangui since Yuan Yin and Yuan Qi are the same concept within two aspects. Yuan Yin is the substance for Yuan Qi; Yuan Qi is the manifestation of Yuan Yin. Yuan Qi is stored in the Life Gate (Ming Men), which is located between both Kidneys.  This has led to the wide belief that Tiangui is the active Qi between both Kidneys.

With regards to the relationship between Tiangui and Yuan Qi of the Life Gate, predecessors recognized that Yuan Qi of the Life Gate plays some role in reproductive function; the book Classic on Medical Problems (Nan Jing) states: “Ming Men (Life Gate) has the function of storing sperm for men and being in charge of the pregnancy process for women,” though no predecessors have clarified the relationship between Tiangui and Yuan Qi.  More recently, it has been deduced that they are same substance: Yuan Qi contains Tiangui and is therefore an encompassing concept; Tiangui is only a part of Yuan Qi which is transported to the uterus and has its own functions in menstrual formation and pregnancy.

How does Tiangui get to uterus?  The answer can be found in the Qing dynasty book: Essence of Medical Classic in the Confluence of Chinese and Western Medicine, written by Tang Zong Hai, who stated: “Tiangui travels to uterus through the Kidney meridian.”

From meridian theory we know that the Chong meridian originates from the uterus and has three major branches.  One branch travels upwards along the spine, another branch aligns with the Stomach meridian, and the third aligns with the Kidney meridian. The Chong meridian is the ‘Seaof Blood’ and its functions are to nourish the viscera and muscles and send its extra Blood down to the uterus to transform into menses. The term ‘Tai Chong’ is mentioned in the Nei Jing, but there are very few other doctors that discuss exactly what this meridian is.  According to Wang Bing, the first scholar to study the Nei Jing, the Tai Chong meridian travels down the Kidney meridian – opposite in direction to the flow of Kidney Qi, which flows up from the foot to the chest.  Therefore, Tai Chong is regarded as the most prosperous branch of the Chong meridian because it is supplemented by both Tiangui and Kidney Qi.

Since the Chong meridian originates from the uterus, uterine Tiangui not only transforms Blood to menses through the Qihua function of the Kidney, but also warms and nourishes the muscles and joints to keep them strong and flexible.  This is achieved through the opposing movements of the Chong Qi travelling down to the feet and the Kidney Qi going upwards to the uterus and beyond which powerfully forces the Qi and Blood to go to the collaterals.  This explains why patients with menstrual problems often manifest with signs and symptoms such as cold feet and swollen ankles: the Chong Qi is unable to go downward to warm and nourish the muscles and joints. There is also strong evidence that shows the connection between Tiangui, Chong Qi and the lower leg muscle in the menopausal stage.  After menopause, Tiangui starts to disappear, and with declining Chong Qi, menses will cease and the leg and foot muscles can start to atrophy and the joints can become stiff.

The Kidney and Other Organs

The most important treatment method in gynecology clinic is to Regulate Qi: this is the theoretical basis for any gynecological treatment method. Dr. Wang’s teacher, Dr. Ha LiTian, one of the most famous TCM gynecologists in China in the last century, often said that in his experience, regulating Qi when making prescriptions is the key for ideal effectiveness because in gynecology pathology the abnormal movement of Qi is the leading mechanism which causes dysfunctional menstruation, leucorrhea, pregnancy problems, and postpartum diseases. Dr. Ha often used herbs such as Xiang Fu and Chuan Xiong in treatment as well as the acupuncture point Tai Chong (LV3).

Menstrual formation and the normal movement of Qi is directly related to the Qihua of Kidney, which of course is related to the proper functioning of Qi in the other organs, especially the balance between Kidney Qi moving upwards and Heart Qi moving downwards to the Uterus.  The Liver has the function of maintaining free flow of Qi movement which assists in maintenance of the harmony between the Kidney and Heart, which in turn, keeps the function of the Chong and Ren meridians normal. When Liver Qi fails to maintain free flow of Qi movement, reversed flow of Chong Qi occurs. Many gynecological diseases are pathologically related to the reversed flow of Chong Qi such as irregular menstruation, dysmenorrhea, premenstrual syndrome, morning sickness, eclampsia, leucorrhea, pruritus vulvae, infertility, invasion of the Blood chamber by heat, gynecological masses, etc. In clinic, smoothing Liver Qi is a very effective way to harmony Chong Qi.

Menstrual physiology relies heavily on the coordinated interaction and balance between all of the functions in the body, including the organs, meridians, Tiangui and Qihua.  Through the appropriate use of herbs and acupuncture, perfect balance can be achieved or maintained.

For any questions regarding menstrual physiology, please contact us.  We would love to hear from you!