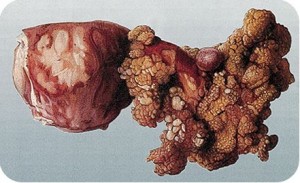 Ovarian cancer is one of the cancers with a high mortality rate, as it generally presents with no symptoms until later in the progression of the disease, which limits the effectiveness of any type of therapy.  Women with a family history of ovarian cancer or those with a personal history of breast cancer are at increased risk and should regularly see their doctor for screening.

Development of a mass is the most common indicator.  It is often beside the uterus with an evident margin or mobility.  This generally presents with abdominal pain and distention, lumbago, pressure symptoms, pain symptoms and menstrual disturbances.  It should be noted though, that not all ovarian masses are malignant, some are benign.  A loose rule of thumb states that masses that develop in women under the age of 35 are benign, while those that develop in women over the age of 35 tend to be malignant.

Other than a physical exam indicating a mass, a doctor may also perform a cytological exam, biopsy, ultrasound, radiological exam, or abdominoscopy.  These can help give information about the cancer as well as whether it is malignant or benign.

Ovarian Cancer According to TCM