The Ins and Outs of Pregnancy & Labour Support 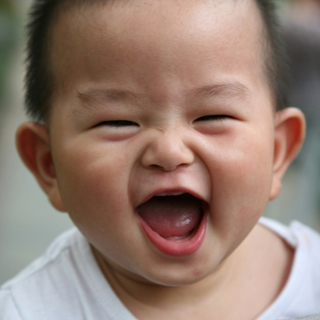 In recent years there has been a shift within the community of pregnant women.  Many women are opting for the support of midwives instead of doctors and home births instead of hospital births.  There are as many reasons for it as there are pregnant women, though most find comfort in the support of midwives.  In previous posts we have shown how incredible Chinese Medicine is at treating various diseases, and here we add another amazing thing about Chinese Medicine: it can help women support their pregnancies and it can easily and effectively support midwives in their role as well.  Acupuncture was originally used for delayed labor and more recently has shown great effect in presentations of difficult labor, breech position, retained placenta and postpartum retention of urine.  Please note, this summary is based off Maciocia’s chapter on Acupuncture and Herbal Medicine in Midwifery (see reference at the bottom).

What is Labour in Chinese Medicine?

Sounds like a funny questions, right?  While the presentation is the same, the process is described differently and Maciocia describes it eloquently, he says: “The end of pregnancy is characterized by the shift from a Yin accumulation to a phase of Yang patterns, culminating in labour and delivery.  Yang expels Yin, and the Yang force provides the movement that expels the fetus.  Qi pushes Blood and the uterine door opens in a significant downward movement.  A constant balance of Qi and a significant supply of Blood are necessary for a harmonized delivery.”   And there are three stages:

Generally the onset of labor is characterized by the rupture of the amniotic sac which often leaks a clear liquid.  Contractions should start 6-24 hours (opinions vary depending on the expert) after the breaking of the water.  During this time, acupuncture can help to enhance the function of the uterus thereby stimulating contractions, especially in cases where contractions start late.  Let’s take a look at some specific labour problems.

Treatment for breech presentation has gained some notoriety over the past couple of decades, mainly by the use of moxibustion on UB 67 (Zhi Yin – Reaching Yin).  Moxa is applied on each foot one time a day, 15 minutes each time for a series of five days.  Wait a day to see if the baby turns.  If it doesn’t work, repeat the procedure for another 5 days.  This treatment has been shown to increase fetal activity enough to turn the fetus.  It does this by increasing adrenocortical secretions.  This in turn increases placental estrogens thereby increasing myometrial sensitivity, while also changing prostaglandin levels thereby increasing myometrial contractivity.  This increases fetal heartrate and thereby increases fetal activity.  Since this treatment does not require any use of needles but does require daily administration it can easily be done by a partner or spouse.  Using the herbal formula Bao Chan Wu You San can also help. 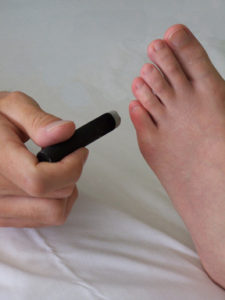 Acupuncture as an Analgesic during Labour

Not only is acupuncture good for pain type diseases regularly, it is also good for labour pain.  Many use LI 4 and SP 6 (which are contraindicated for use during pregnancy but not during labour), though Maciocia argues the impracticality of these points since women tend to want to move during their labour.  Instead he advocates for the use of ear points, especially Uterus + Endocrine or Shen Men + Endocrine, depending on which points are most sensitive.  Sensitivity is diagnosed with a probe or blunt end of an acupuncture needle.  One ear is needled at a time so that the ear needled can be switched depending on which side the patient wants to lie down.  0.5 cun needles are used and a small piece of cotton placed between Uterus and Shen men to prevent the needles from rubbing against one another and then electro-acupuncture is applied on these points.  The strength of the stimulation can be adjusted according to the presence of a contraction.  Generally the intensity of the stimulation increases as the labour progresses.  Keep in mind, it usually takes 10-15 minutes for the acupuncture to take effect, though studies show it can take up to 40 minutes.  In case the patient is sitting in water or in a pool, use manual stimulation instead. 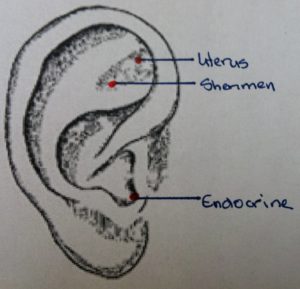 Hey, wait a minute…  isn’t all labour difficult?!  The answer is Yes, absolutely!  Though labours with abnormalities with contractions, cephalo-pelvic disproportions, or malposition (incorrect position of the head) or malpresentation (incorrect position of the body) of the fetus are considered more difficult.  Any of these occurrences can result in serious complications for both mother and baby.

It is up to the practitioner to work closely with the midwife or obstetrician for accurate diagnosis and treatment and ensure regular and rhythmic contractions, especially in cases like cephalo-pelvic disproportions in which anatomical conditions are beyond an acupuncturist’s scope of practice.  The most commonly used points to induce labour are LI 4, SP 6, UB 31 and UB 32.

Difficult labour may be due to different reasons:

If the placenta is not expelled within 20 minutes of delivery, it is considered to be a retained placenta.  Occasionally a full bladder can cause placental retention, though otherwise acupuncture can be very helpful.  One should take care that the placenta has not adhered to the uterine wall in a condition called placenta accretia.  This is a serious condition and needs medical attention.

Retention of Urine after Delivery

This is the last disease we will be taking a quick look at.  Urine retention can be caused by various factors some of which include bruising or prolonged over-stretching of the urethra, over-distention of the bladder, a lax abdominal wall, or even a sore perineum.  In more severe cases there can be over one liter of urine retained resulting in overflow or hemorrhage.  In these cases a catheter is generally inserted.  Using acupuncture has shown to help alleviate the retention, especially in the early stages.

Labour and the arrival of a long-awaited little bundle of joy is an exciting – and sometimes overwhelming time.  There have been many advances in the past century (for Western Medicine) and centuries (for Chinese Medicine) that can help to ease this time to help introduce the little one into the world in a safe and smooth way.  For patients, alternative healthcare practitioners, doctors or midwives, if you have any questions or would like more information, please contact us!  We’d love to hear from you!

References:  please note, this article is a summary of Maciocia’s chapter on Acupuncture and Herbal Medicine in Midwifery: